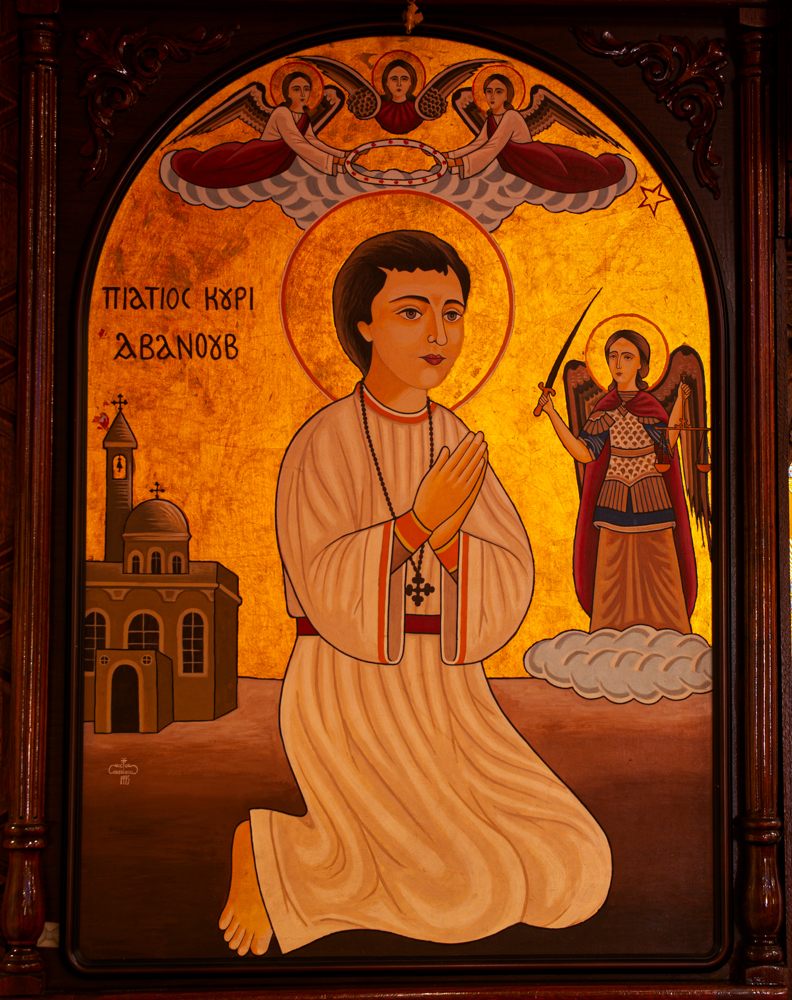 Abanoub was born in a town called Nehisa in the Nile Delta. He was the only son of good Christian parents who died when he was a young child. At the age of twelve, Abanoub entered the church to hear the priest asking the congregation to remain faithful during the persecutions provoked by Diocletian, the Roman emperor.

Abanoub received the Holy Sacraments, and then prayed for God to guide him to where he may confess his faith in the Lord. When he finished, Abanoub went out and gave all of his possessions to the needy, after which he set off, on foot, to a city called Samannoud. While he was walking, he saw the Archangel Michael in celestial glory. The sight was so extraordinary that Abanoub fell to the ground, but the Archangel raised him up, and told him that he must suffer for three days in Samannoud, and that he would also witness to Jesus Christ in other places.

Once in Samannoud, Abanoub went to the Roman ruler and declared his faith openly. He also insulted the ruler’s idols that the ruler became furious and gave orders that the child be whipped on his belly. The soldiers beat Abanoub severely, until his intestines poured out, but the Archangel Michael miraculously healed him. The ruler then put him in jail with other Christians, who became encouraged by his presence among them, and later were martyred for.the name of the Lord. On the following day, the ruler took Abanoub on a boat to a city called Atrib, and as a form of punishment, the young saint was hanged upside down from the sail of the boat. The soldiers, along with their ruler, began to drink and dance, while hitting Abanoub on the mouth. Abanoub’s nose bled, but then, unexpectedly, the soldiers became blind and the ruler became paralyzed. In their agony they cried to him and said, `Please Abanoub, pray to your God to heal us. For if we are cured, we will become Christians.’ Saint Abanoub replied, `This will only happen in Atrib, so that everyone there should know that there is no other God but Christ. ‘

When they arrived in Atrib, they were all healed, and they cried with joy, `We are Christians! We believe in the God of Abanoub!’ They took off their uniforms and threw them on the ground in front of the ruler of Atrib. The governor became infuriated and ordered that they all be killed.

In Atrib, Abanoub was tortured severely, sometimes by whipping and sometimes by being tied to a steel bed and having a fire ignited under him. But in all these tribulations, the Lord showed his power and Abanoub was saved. As a result of these miracles, many onlookers became Christians, and received the crown of martyrdom. The ruler then ordered that Abanoub’s hands and feet be cut off, but suddenly, the Angel of the Lord came down from heaven, replaced his hands and feet, and healed him, after which Abanoub arose and walked in front of everybody. Hundreds of people became Christians as a result of that miracle. Frustrated, the ruler called some of the best magicians in the country, and asked them to help him defeat Abanoub. They suggested that he should be thrown to the poisonous snakes, which `had enough poison to kill two or three hundred men,’ they said. So they put Abanoub in a cell with the snakes, but God, Who shut the mouths of the lions at the time of Daniel, tamed the snakes and they did not harm Abanoub. In the morning, and to everyone’s astonishment, Saint Abanoub came out from the cell alive. Suddenly, one of the snakes crawled out of the cell and coiled itself around the ruler’s neck. The man started shaking and he cried, `In the name of Jesus, your God, be merciful to me and do not let the snake harm me.’ The young saint, who loved everyone -friend or enemy -just as the Gospel commands, prayed from his heart, and then ordered the snake to come down and not to hurt the ruler. On that day, many people who were present, including the three magicians, believed in Jesus.

Finally, one of the ruler’s advisers told him to behead the saint and put an end to that episode. So the ruler ordered the soldiers to kill Saint Abanoub by the sword, after which a faithful man called Julius wrapped the young martyr’s body in fine linen and sent him to his hometown, Nehisa, where he was buried. In 960 A.D., his body was transferred to the church Saint Mary in Samannoud, where it still lies until today. Throughout the years, Saint Abanoub has had many apparitions in that church.

May the prayers and supplications of this great Martyr, the Child Saint Abanoub be with, us. Amen.