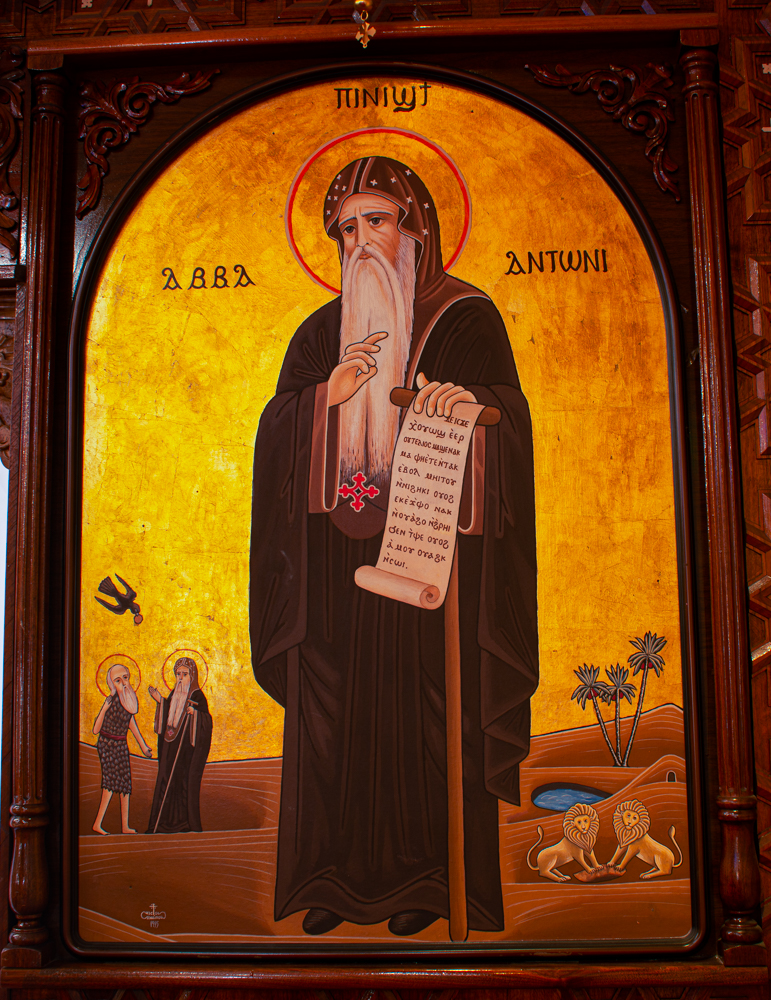 St. Anthony of Egypt, also called St. Anthony the Great, was a religious hermit and one of the earliest monks, considered the founder and father of organized Christian monasticism. His rule represented one of the first attempts to codify guidelines for monastic living.

A disciple of St. Paul of Thebes, Anthony began to practice an ascetic life at the age of 20 and after 15 years withdrew for absolute solitude to a mountain by the Nile called Pispir (now Dayr al-Maymūn), where he lived from about 286 to 305. During the course of this retreat, he began his legendary combat against the Devil, withstanding a series of temptations famous in Christian theology and iconography. About 305 he emerged from his retreat to instruct and organize the monastic life of the hermits who imitated him and who had established themselves nearby. When Christian persecution ended after the Edict of Milan (313), he moved to a mountain in the Eastern Desert, between the Nile and the Red Sea, where the monastery Dayr Mārī Antonios still stands. There he remained, receiving visitors and, on occasion, crossing the desert to Pispir. He ventured twice to Alexandria, the last time (c. 350) to preach against Arianism, a heretical doctrine teaching that Christ the Son is not of the same substance as God the Father.

The early monks who followed Anthony into the desert considered themselves the vanguard of God’s army, and, by fasting and performing other ascetic practices, they attempted to attain the same state of spiritual purity and freedom from temptation that they saw realized in Anthony. Anthony’s spiritual combats with what he envisioned as the forces of evil made his life one long struggle against the Devil. According to St. Athanasius, the bishop of Alexandria, the Devil’s assault on Anthony took the form of visions, either seductive or horrible, experienced by the saint. For example, at times the Devil appeared in the guise of a monk bringing bread during his fasts or in the form of wild beasts, women, or soldiers, sometimes beating the saint and leaving him in a deathly state. Anthony endured many such attacks, and those who witnessed them were convinced they were real. Every vision conjured up by Satan was repelled by Anthony’s fervid prayer and penitential acts. So exotic were the visions and so steadfast was Anthony’s endurance that the subject of his temptations has often been used in literature and art, notably in the paintings of Hiëronymus Bosch, Matthias Grünewald, Max Ernst, Paul Cézanne, and Salvador Dalí as well as in the novel The Temptation of Saint Anthony (1874) by Gustave Flaubert.

From these psychic struggles Anthony emerged as the sane and sensible father of Christian monasticism. The rule that bears his name was compiled from writings and discourses attributed to him in the Life of St. Antony by St. Athanasius and the Apophthegmata patrum and was still observed in the 20th century by a number of Coptic and Armenian monks.

Anthony’s popularity as a saint reached its height in the Middle Ages. The Order of Hospitallers of St. Anthony was founded near Grenoble, France (c. 1100), and this institution became a pilgrimage centre for persons suffering from the disease known as St. Anthony’s fire (or ergotism). The black-robed Hospitallers, ringing small bells as they collected alms, were a common sight in many parts of western Europe. The bells of the Hospitallers, as well as their pigs—allowed by special privilege to run free in medieval streets—became part of the later iconography associated with St. Anthony.